Watch as the one of a kind HakuVillas springs from the ground in Hirafu-Niseko!

Opening in 2019, HakuVillas will set a new standard of luxury in Niseko. Located just steps away from the Grand Hirafu Gondola in Upper Hirafu, HakuVillas was conceived with the guest experience as the central guiding influence over every design decision. Consisting of only 4 luxury villas,this 7-story masterpiece fully integrates Mt. Yōtei into its design from volcanic stone and rich natural woods to the breathtaking vistas, and has been conceived of from ground up to be fully compatible with HakuLife service. The Taiga collaboration combines distinctive Japanese alpine design with unprecedented spaciousness and lavish comforts.

Explore the stunning 4 seasons of Niseko, Japan, and how nature in all her glory has woven itself into the fundamental fabric of our DNA here at Taiga. As year round residents, we are passionate about the Niseko - Kutchan area, and take every opportunity to celebrate the talented locals and beautiful scenery.

We are long time locals, and our Niseko surroundings influences our approach to every aspect of our work, from guiding a first time visitor to the best Niseko holiday accommodation, looking at a real estate investment, or embarking on the very deep and personal journey of designing and building a holiday home.

With over a year of collecting footage and in production, we would like to thank long time contributor Glen Claydon Photography for producing, as well as providing the stunning aerial footage that really shows Niseko, video footage of our projects, time-lapse footage and assistant editing, Shane Peel from My House Pictures for video footage and collaborating on the script, video editing and additional footage by Neil Hartmann, and additional footage by Satoru Chiba.

Thank you to everyone for your support, and enjoy!

One of Taiga's largest projects to date, Ginga is moving along quickly! With 7 bedrooms, media room, garage, man-cave, open LDK, and balcony jacuzzi, it aims to set a new benchmark for luxury. 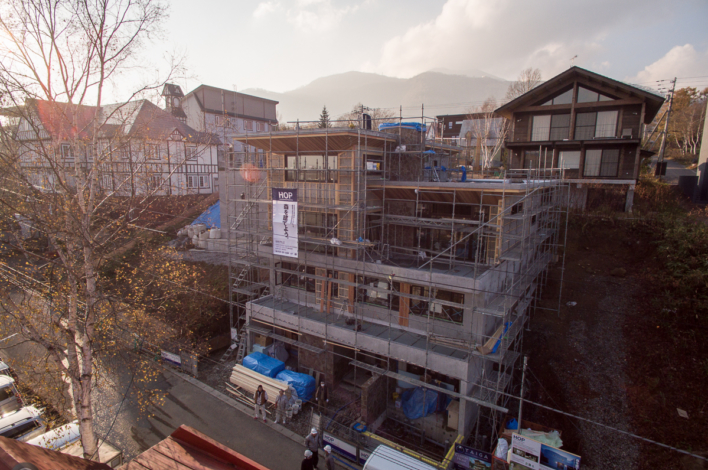 ​Construction Costs Spiking in Niseko and all of Japan

So what's up with construction prices in Niseko? They are up, part of a bigger trend across the country. Quotes for pending Taiga projects have been up significantly over a year ago, by as much as 20 ~ 30%. Collaborating Sapporo architects have been cringing, since their initial advice based on years of experience rings a little hollow when the quote slides across the table. Unfortunately, the reasons are much bigger than our little Niseko property market:

1) Large infrastructure and peripheral residential/retail projects for the Olympics means the big construction companies are already locking in available labour. The larger construction companies starting telling me this shortly after the Olympics were announced, and I initially dismissed it as an excuse to justify a higher quote. But then I started hearing trickles that rebuilding in tsunami affected Tohoku is suffering, due to the "Olympic labour shortage". The Big Boys have put the word out to form carpenters and steel workers… something like "whether there is work or not, you are with us for the next 6 years".

2) Massive infrastructure projects in the tsunami affected areas are finally underway. Hard to believe, given the tsunami happened in 2011, until you have worked with Japanese bureaucracy. The scale of the rebuilding is hard to fathom… we are talking about 100s of kilometres of coastline.

3) The increase in consumption tax to 8%, and talks of raising it to 10% (currently delayed), has created a construction boom for individual houses and apartments. I have never seen so many new houses in the neighbouring farming towns of Kutchan and Niseko. Locals, who have nothing to do with tourism, have been building homes and renovating in record numbers.

4) The ageing population means tradesmen are starting to retire in big numbers. Walk onto any job site in Japan, and I can pretty much guarantee you the average age is over 50. When the owner of Kazahana came for a site inspection, he marvelled that amongst the 5 regular carpenters, there was a combined experience spanning 180 years. The upside is a phenomenal execution on the details. But the downside is just over the horizon, part of the larger impending population crunch. Sure, construction demand should also decrease concurrently, but it seems in the short term that the pending Olympics and rebuild in Tohoku are going to create a de-linking between labour and demand in the short term.

So let's raise a glass to the weak yen, which has been the only bright light in this builder's market. The diving yen can almost make the increase balance out for foreign investors (harder on us locals!). My parting advice for anyone thinking about building in Niseko is to stock up on cheap yen, because the high construction prices are probably here until the flame goes out at the Tokyo Olympics.

Keith Rodgers is the Managing Director of Taiga Project Management

Kazane Chalet in Niseko has completed construction and been handed over to the happy new owners.